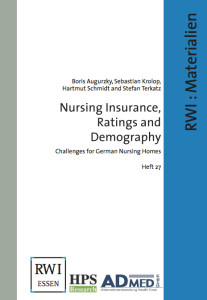 The troubled financing situation of Germany’s statutory health insurance (SHI) is a subject widely debated in the public. A further reform for 2006 is now in the offing, only three years after the Act on the Modernisation of Statutory Health Insurance came into force. So far, though, little notice has been taken of the need to reform the country’s statutory nursing insurance (SNI) – doubtlessly also on account of its smaller volume of contributions compared with SHI. But funding problems similar to those of SHI emerged already back in 1999, the year when expenditure first outstripped revenue. Right now the gap can only be closed with the capital reserve established with the inception of the SNI. But the reserve will be exhausted in only a few years. So it was against this background that a first, albeit modest, reform came in 2005 with the contribution rate being raised by 0.25 percentage points for persons without children.
However, no efforts for a lasting solution have been undertaken so far. This is something that is badly needed as the capital reserve of the SNI dwindles and as the gap between revenue and expenditure widens further with the greying of the population. The SNI moreover faces far greater burdens from the demographic trend than does SHI. Häcker/Raffelhüschen (2004) expect the contribution rate to go from 1.7% today to over 6.0% in 2050. As early as 2020 the rate is projected to reach about 2.5% – that is if the over 600 000 additional outpatient and inpatient nursing patients expected by that time have not already been excluded from nursing care. In this context action must be taken sufficiently in advance to prevent gross injustices from happening later on.
The present Study looks at various measures for stabilising the finances of Germany’s SNI, with special attention being paid to the inpatient nursing market. In 2003 it accounted for EURO17.2bn or 72% of the professional nursing market.